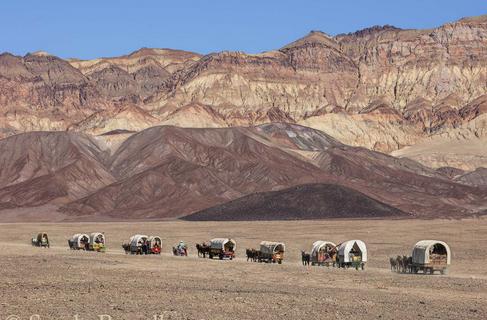 Corral #14, once called the shetland Pony club of Antelope Valley, was started in the 1960's by a group of folk from the high desert Community of Antelope Valley in Southern California. Some of them had owned and enjoyed horses when they were younger but now felt they could still have the same fun with ponies.  The ponies would be less work and safer to handle for the retirees.

The "ponies only" rule was changed in the mi 1980's to accommodate more club members. The Shetland Club's name was then changed to "Corral#14-Western Wagons". Many more people would now enjoy the Death Valley drive with their horses and mules.

Each November our Corral 14 wagon train travels from Wade Monument at the southern end of Death Valley to Furnace Creek.  We stop along the way at Saratoga Springs Ashford Junction, Salt Tanks, Tule Springs, and Desolation Canyon,

The 49er Encampment in Death Valley, California, is held every year to commemorate the first pioneers who traveled west with their families in search of the ever elusive gold. Many of them were not drawn by an overwhelming desire to farm and settle the country, but to get to the gold fields of California by the fastest route possible. It is written that many of them had intentions in the beginning to return to their home state an buy the farms they could not otherwise afford.
In making this journey they proved time and again the indomitable spirit that is present in a of us. They set out with a goal and, God willing, would accomplish that goal. There is no way that those of us living today can actually experience the motional and physical trials the pioneers had on this journey.  For just a minute consider this scenario: The husband walks into a little farm house in Illinois and says "Honey, pack up our kids and whatever else you can't live without.  We are going to make our fortune in the California gold fields."  How many of us today could even comprehend such a move?  There were no cars, trucks trailers or moving companies. You had the few treasures your family had accumulated since emigrating from their homeland. Your children were not grown but growing and still vulnerable to childhood diseases that could threaten their lives.  Maybe the husband had ever driven a wagon and team and knew nothing about the care and maintenance of either. Again, imagine yourself sitting in the middle of the desert where you have no idea where there is a town or even a homestead.  In the covered wagon, which is your only protection from the elements, you have a spouse who is ill. There is no cell phones, car or doctor for hundreds of miles.  It's impossible for us to empathize with what their emotions might have been. They were so close to the situation they did not realize that in future generations they would be hailed as heros, as brave pioneers who settled our wonderful land,  they very often just endured and overcame. Every year since 1967 the Equestrian Trails Corral #14 Western Wagons have traveled the same trail of these pioneers  We do it as a reminder that we are so fortunate to have had such brave and, yes sometimes greedy people, as our ancestors.

​The Lone Pine to Bishop wagon drive was started in 2001.  It was the desire of some of the members of the ETI Corral 14 to commemorate the contribution the railroad and settlers made to the Owens Valley. Norm Noftsier and Ron Remy scouted a route that followed the old narrow gage railroad had and found that a wagon train was a possibility. The first drive only had a few wagons, including Ron Remy, Mike Herman and Lance Kirkpatrick as they scouted a host of the best camp sites along the way. The drive that has evolved from this is scheduled each year during the week prior to Bishop Mule Days. This year we have been invited to gather at the Lone Pine Film Museum and we are looking forward to sharing this event with the folks in Lone Pine. We hope to see some friendly faces waving us goodbye on our journey as we leave on Monday May 13, 2013. The wagons travel almost entirely in sight of the old railroad bed. Along the way, can be seen some of the foundations left from the little settlements that grew up as a result of the railroad activity. There are timbers and nail to be seen from the original bed along with interesting wildlife, blooming cactus ad domestic stock. This drive has been the history lesson for many children who rode along in the wagons during the day and helped with camp at night, after the wagons circle. The members of Corral 14 are always looking for ways to improve the route and integrate more of the history of the area to make the wagon drive interesting. Currently one of our camps is at Zurich Station where the old cattle pens and the foundations can still be seen. Other camps are set up so we can enjoy the beauty along the Owens River. This wagon drive is all on flat dirt roads and is 5 days in duration. The distance driven each day is approx. 12-16 miles arriving at our camps in the mid afternoon so that people and livestock have time to rest and enjoy the beautiful vistas of the Sierra Mountains. Outriders are welcome and are encouraged to join with a wagon for their meals. A support truck transports any supplies that cannot be carried. If you don't have a wagon or a riding animal we will be happy to place you with a wagon to ride in and enjoy the trip.